We had 19 differents persons nominate figures for November, a total of 57 nominations. 25 differents figures were nominated. Here is the final nomination list, it's time to vote for the top five and determine the monthly winner!

nuffnmuch
Even though she is losing, I gotta go with Sugie Sun. My favorite statue of 2014.
7 vuotta sitten

Valkyria
This month was a tough choice. I own this Homura and Sugie Sun, but I also have Koto's Levi and Mikasa on order. Sora's admittedly a beautiful figure but was eliminated since I really have no attachment to her. Out of the remaining four, I had to give it to Levi. I just think he's the most impressive overall and probably the best Levi scale available for the foreseeable future, IMO. Plus, being the only male figure on the poll gave him the edge for me. Homura is a strong runner up though. Her base, likeness, and accessories are really well done. Kind of surprised Mikasa is dead last but there was some stiff competition this month.
7 vuotta sitten⊛

Stebbie
Levi for sure! <3 He looks amazing!
7 vuotta sitten

lusciouscookies left shark
c'mon homura!! you can do it!!!
7 vuotta sitten

Moro
Aaaaand Homura wins, though at least Levi is a fairly close second. Disappointing, I thought for once a figure I liked best would win but I guess not XD It's my curse.
-edit-
HA. I come back to see and Levi's won by a thread!
7 vuotta sitten⊛

Azyx
ZoroZoldyck • 7 vuotta sitten • #2502788The doflamingo figure should say banpresto next to it not megahouse..

lesbian CEO of obsessive merch buying
I was in love with Homura the second I saw her. My second choice would have to be Sugie, she's absolutely stellar. ;;
7 vuotta sitten
Näytä lisää kommentteja 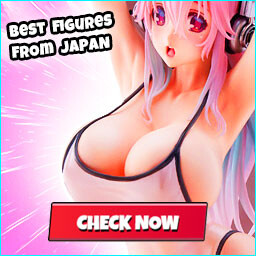