I always thought that my Shiromuku Rem & Ram looked really lonely without a fitting Emilia and I wanted Furyu to make a Shiromuku Emilia for so so long and now that she's finally announced, I'm so happy to complete the set of three.

I simply love the thought of a fitting set of figures and characters - scale, outfit, bases etc. but sometimes someone is simply missing.

Which set of figures is that for you and which character is missing from it?
1,653 osumaa • 1 suosikki • 23 kommenttia

and though i don't actually have hanako, it feels weird that nene hasn't gotten a nendoroid yet to match him. it feels incomplete :(
1 vuotta sitten

WhoBeDaPlaya
Shirobako - everyone else is missing from it :(
ITEM #331494
1 vuotta sitten

Betka
I was thinking yesterday about Golden Kamuy nendoroids. There's Asirpa ITEM #659762 and Ogata ITEM #904675 but no Sugimoto (who is like MC of the series if you'd ask me).
It really breaks my heart, because I really love chemistry between Sugimoto and Asirpa... but she's stuck with Ogata (who is really well written character but jesus, stay away from me I'm scared of you)
1 vuotta sitten

SakuraUchiha
For me it's definetly every Inuyasha set that doesen't have Rin included but has side characters like Kagura or Koga involved. That's just me however. Nothing against Kagura or Koga,I love both of them but I feel like Rin should be added to more sets truly.
1 vuotta sitten

Naritsumi
I hope this doesn’t notify you multiple times!! I have no clue how this works ^^”

Seiki • 1 vuotta sitten • #95303406 It feels especially painful for my Asuna: Titania Nendoroid ITEM #198356 who has a pose that was intentionally designed for when she reunites with Kirito. They did make an SAO arc Kirito, but it feels weird that there isn't an ALO one (or even a Leafa for that matter). Poor Titania gets to be excited for no one to come rescue her...


Oh my gosh, that’s my biggest gripe with the SAO nendoroid line! It’s not like they lost the license (after all, Alicization got multiple nendoroids), so it shouldn’t be that difficult for GoodSmile to produce a matching Fairy Dance Kirito for his TitaniAsuna. Just goes to show that MCs deserve so much more love than they get.

Also, Leafa would have made for a great nendoroid!! I’m surprised she didn’t receive one, considering how popular her character is. :(

Seiki • 1 vuotta sitten • #95303406Inversely, I wish they'd make a Nendoroid of Leaf to go with Pokemon's Red & Green. Though whether or not she should be included in that set seems arguable considering how far less prevalent she is compared to the other 2, even in the games I absolutely agree! She absolutely deserves a nendoroid. It may not be as impossible as you may think! After all, GoodSmile seems to release random nendoroids out of nowhere from time to time. Who knows, maybe she’ll be the next in line! :)

Seiki • 1 vuotta sitten • #95303406 So many Sora & Riku's with no Kairi to go with, either. Glad we're getting the Nendoroid, but wish we'd get more than just the KH3 one, especially considering we got Sora & Riku for KH1, 2, & 3 It would be great to see Kairi receive KH1 and KH2 versions!! The fact that he doesn’t already is quite sad, and with the “sudden” appearance of KH2 and KH3 nendos, it’s not insane to think that Kairi might be receiving more variants! :)
1 vuotta sitten

xMera
I know Miku has enough figures. But ther is no normal scale, figma and nendoroid of V3. V2, Append, V4x and V4 chinese have all 1 scale+nendoroid+figma. This incomplete setup of her boxart Outfits hurts.
1 vuotta sitten

lesser-robot-cat
nezumiii • 1 vuotta sitten • #95303243Hunter x Hunter nendoroids. Since they decided to make Gon x Killua, Kuroro x Kurapika.
They could have added 2 more: Leorio and Hisoka. It would be a complete set 'almost'.

What HxH Nendoroids. They never made HxH Nendoroids. If they had, they would have made Leorio. So clearly you see, we all just imagined the whole... idea... that there were ever HxH Nendoroids. IF they did, and of course, there was a Leorio, I would certainly have bought them all! But since there is no Leorio, then logically, there are no others, either. 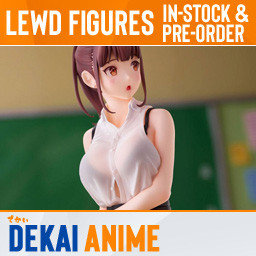 Hi, hola, hello and welcome to my blog!

Here you'll find anything I'm in the mood to post which ranges from figure reviews, haul posts, questions and my rambling of course.

I hope you enjoy whatever you are reading and thanks for stopping by!
☆⌒(≧▽​° )